Well, not contrasting the whole of Asia of course, that’s just too much, and actually just the Adelaide area in Australia. Starting point was Taiwan as in the previous blog, definitely part of Asia but well-advanced along the path to … to what? Let’s leave that to later. Next came Vietnam, then Cambodia, then briefly Thailand and finally Adelaide. 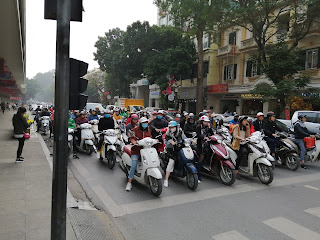 First thing that hit me in Adelaide was the traffic. Not literally of course, that was much more likely in Asia. Crossing the road in Hanoi, Ho Chi Min City, Phnom Pen and so on takes bravura, confidence and luck. Pedestrian crossings do exist, but are ignored. The traffic forms an almost constant rapid stream and consists mainly of motor scooters, some carrying entire families. The pavements are littered with the remains of people who gave up on crossing or were slaughtered in the attempt. That last is an exaggeration of course, but the rest is not. No one is going to stop to let you go, so you just have to go. And somehow, miraculously, the traffic forms a bubble around you as you pass. It is actually very efficient. In Adelaide  I was castigated for daring to cross the road where there was no crossing, and was amazed to see groups of people waiting for a crossing light to turn green when there was no traffic on the road at all. Fresh from Asia I had to constantly restrain myself.

In Adelaide the roads are generally excellent, in Cambodia and to a lesser extent Vietnam; they are likely to have stretches that are not metalled, possibly never have been. The dust kicked up by cars speeding over these stretches is spectacular, and for cyclists such as myself suffocating and blinding. In Cambodia people are packed tightly, standing room only, into open trucks. I saw this soon after crossing the border from Vietnam and was both amazed and appalled. Yet as we, seated comfortably in a bus, passed by them they waved and smiled at us.

As an ex-telephone engineer I take a passing interest in wiring. In Adelaide there is not much to see, in Vietnam and Cambodia you cannot miss it. Multiple cables hang like tangled liquorice from poles, buildings and anything that is stationery. A puzzling mesh which would seem impossible to maintain and is possibly dangerous, thus similar to the public transport networks of those two countries.

May I mention toilets? Yes I can. Oddly enough I prefer the miniature hand operated shower heads attached to each of them in Asia over the wasteful use of tissue paper. That said the general standard of toilet repair and cleanliness is far superior in Adelaide.

Now a rapid switch of subject to wildlife. I saw little in Asia (apart from the Kratie rats and dolphins); though I must confess I did not visit many national parks. However, the fauna of Australia is in your face: in the gardens, parks and roadsides in fact almost everywhere. I especially enjoyed the Australian birds: from the tuneful magpie to the friendly willy wagtail and the colourful eastern rosella and more. Then there are the koalas, kangaroos, echidnas and so on – wonderful.

With regards to people, well its all so mixed up nowadays, but I found the Cambodians the friendliest, possibly the most relaxed and probably the most attractive.

The currency in both Vietnam and Cambodia is quite ridiculous. I regularly drew two million dong from the cash machines in Vietnam, those that worked for me that is, so I now know how it feels to be a millionaire.  Cambodians have a similarly inflated riel but most business is done in American dollars there. I carried one 10$ note with me during all my time in that country and, though I regularly offered it up as payment, it was always refused because it had a minute tear along one edge. Yet in Australia it was changed without a glance. 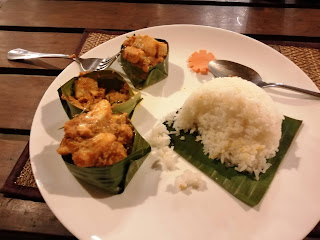 Then there is food, a sensitive topic for a man with a sensitive stomach. Vietnam leans towards China for many things, yet it also embraces bread as well as rice. Cambodia leans more towards India but has its own recipes, I particularly liked ‘amok’ - curried fish in coconut milk eaten with boiled rice. And Australia leads on snitzel which the sensitive stomach appreciates. But in truth there is little contrast here since Adelaide offers food from all over Asia in addition to British and American staples.

In terms of development Adelaide is a nice clean city with beautiful parks, and everything works. Taiwan could be regarded similarly in relation to the rest of Asia and Thailand is not far behind it. Vietnam comes next displaying a remarkable recovery from that dreadful war with America and, though there is some way to go, the improvements wrought by a capitalist based economy are visible everywhere. Cambodia must be regarded as a work in progress on many fronts, yet blessed with a pleasant capital and lots of temples – oh so many temples. Please, no more temples.

Finally, I haven’t mentioned pubs. All I can say is how nice it was to return to England and drink a few pints of real ale in my local.