The mouse train to Allahabad

India is a fascinating country. Colourful and noisy, crowded and filthy, it is an enigma that you can love and hate almost in the same instant. We have now been travelling for over a month and our longest stay has been in this country, though we have rarely remained in one place for long.
Our initiation was in Chennai, once called Madras. It was, well... challenging. Landing at 4.30 in the morning was not a good start and worse, the pick up from the hotel was not there, though he did turn up later. My sensitive stomach lasted all of 24 hours and was still churning as we left on the overnight train the following day – thanks be to Imodium. 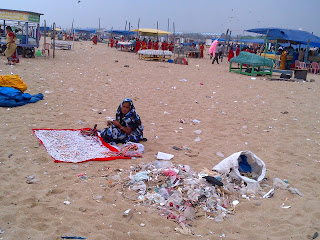 We slept for a while then ventured out. There were no pavements to speak of and crossing the road took both courage and care. The road to the beach was lined with the bed rags of rough sleepers and smelled strongly of urine. We crossed what could have been a pleasant river – it was in fact a running sewer with muddy banks strewn with rubbish. It made us both retch and wish that we were anywhere but Chennai. Then we found the university and its grounds which were a little more pleasant, though the buildings were mostly in a very poor condition. Crossing a busy road we took a long walk towards the sea through layers of litter covered lightly with sand. All around us were stalls selling food we could not countenance, miniature fairground rides we would not trust and horsemen plying a trade which reminded us of the donkey rides offered in our childhood. Waves, oblivious to this mess, crashed in and young men bobbed around in the dubious water fully clothed.

Fast forward now to Ahmedabad and the Ashram of Mahatma Gandhi (think of a hippy commune without the drugs, sex, alcohol and flowers). This, in comparison, was a very clean area - possibly because the prime minister of Israel had visited it the day before together with India’s PM.  Everyone loves Gandhi and he is a god-like figure in India, though I personally do have a bone to pick with him. His story is wonderfully told through a long poster session at the Ashram and, though we all knew that the chronicle must end with his assassination, there were many tissues in use at the end of trail, mine included. The sadness of the tale is not simply that this man who abhorred violence died violently, it is that he saw his beloved India, free at last from the British, descending into a seemingly unstoppable spiral of inter-religious brutality.

My visit to this city was very successful. I found the college of the lady I am researching, met the principal and was given an excellent tour by Ravi, the head of physics there who proved a fount of knowledge on India in general.  But there was a problem. Gandhi was born in the state of Gujarat where Ahmedabad lies and in his honour the state has declared itself dry – and what is more applies the death penalty to those making booze or selling it. Now, I have no problem with Mr Gandhi condemning alcohol and its effects, none at all. But, when this means that I cannot have a pint or two then I do have a problem.

In fairness it is possible to obtain a permit to buy liquor from certain places between the hours of noon and seven in the evening. But I can tell you that they make it bloody difficult to get one. Of course I tried, of course I did. I even got a letter from my hotel vouching for me and took this to another hotel which, I had been told, had a liquor outlet. But they would not supply the dreaded stuff in the restaurant and said that my letter was not legal. Grumpily sober I had to give up the quest and become TT until we reached New Delhi.

There, in the capital, I did get a drink, and as planned I met Manmohan Singh, prime minister of India for ten years. But that’s another story – one for the book in fact. As I write we are now on the mouse train to Allahabad, the city where Indira Gandhi was born (she’s another of my subjects) and we have met a mouse. It’s quite big one and runs about the floor: it may in fact be a small rat and there may be more than one. The cheekiest one lives under the seat opposite. I saw it first and said nothing. Margaret saw it next and screamed! It too is going to Allahabad, though it will probably stay on the train. I hope so and I also hope that this city is not dry, despite its name.
Posted by Rob Walters at 08:45