The last step and my perfect shop

Here  in Spain, things go at a different pace. In England the corner shop has been eradicated by the supermarket and the ironmongers replaced by the sheds: Wickes, B&Q and so forth. I have a love/hate relationship with the sheds, they seem to have everything except the thing you actually want and I, an amateur, often know more about using their stuff than the people who work there. In Spain the process of eradication and replacement is ongoing. Here, in our small village, we have a fully operational carpentry business which can make anything from a bird box to a barn and a blacksmith who once made nice cowl for my fire for a mere fifteen euros, but is more likely to be making or repairing huge agricultural machines to be towed behind tractors. Oh, and we have two bakeries and two corner shops too. 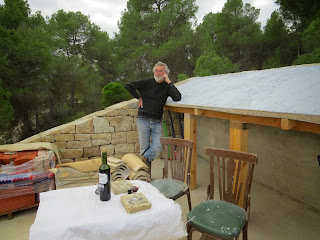 Though an amateur, I do a lot of things myself and in order to do DIY I need bits and pieces, usually small numbers of them. In Oxford, since the closure of the one and only remaining ironmongers in the city, I have been forced to traverse the huge sheds searching for some small item: asking for help but getting none. Here we have Falgas. Falgas is a shop in a village some ten miles away that sells almost anything that you might need, literally. Yes, from a teaspoon to a watering can to a welding machine, they have it all, and they can tell you how things work, and adapt them to your needs. 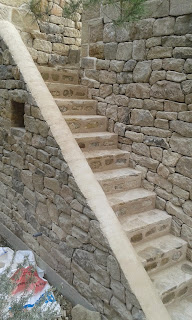 After the first robbery here I tried to secure the door of my caseta (stone hut) with a swinging arm of my own design. I had it tested by criminally minded friends and finally settled on the Mark 3 version. The  latest thief made short work of my clever design. Finding that he or she could not get in after angrily ripping off the door bolt he, it surely was a he, violently tore off part of the door and simply swept my swinging arm to one side. The Mark 3 had failed. I am now working on the Mark 4 and strengthening the door with iron bars. The Mark 4 will have a ratchet mechanism so that it cannot be swept aside. However, in early tests, I found that the ratchet requires a spring assembly to force it into place. I tried to fabricate something using a hacksaw blade as a spring, but it was no good. So, off I went to Falgas to explain my problem in broken Spanish. In very little time the manager had shown me a few possible readymade solutions but they too were no good. Then, as a team, he and I brought together a spring, two bits of tube, one of which fits inside the other and I had my solution. He even drilled holes in the tubes and inserted pins to keep the thing together. Total cost six euros! 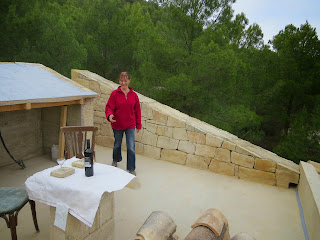 Security aside, progress continues on my project. Two weeks after laying the last stone in the walls, I have completed the external stairs that lead from the main room of the caseta to the terrace above where I am currently building a small stone hut to house water tanks and batteries. For about two years I have been using the slope that now supports the stairs to ascend and descen and to pull up concrete and large stones. During all of that time Margaret has refused to ascend the slope because it is ‘dangerous’. I completed the last of the fourteen steps on Friday and invited her up the steps for a first view of the terrace the next day. I made a table out of concrete blocks, covered it with a white cloth made from a bag in which sand had been delivered then laid out two glasses and a bottle of local red wine. She was touched. Of course, I could have bought a proper table from Falgas…and a wine cooler…and a table cloth…and a bottle opener…and…
Posted by Rob Walters at 07:37