My latest book - 3D Futures - got a great review.

I know that most regular readers of this blog are already aware of the launch of my first science fiction novel. However, I can't resist putting the first review up here so that others can read it. Obviously it is a good one (would I put it here if it wasn't?) But I am impressed and delighted by Giulio Prisco's comments. He has clearly read the book fully, not just scanned it to produce a review.

Here it is in full. Alternatively you can access it at his sci-fi website which is called skefi'a - just click. The eBook is still on sale for just under a pound/dollar/euro as an intro price from Amazon and Smashwords. Just click here to see it at my bookshop. 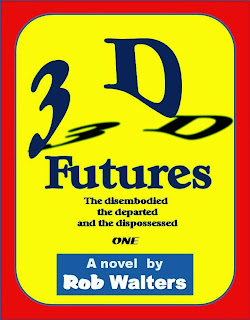 3D Futures: The disembodied, the departed and the dispossessed, by Rob Walters, is a fresh, entertaining and thought-provoking science fiction novel with interleaved stories, including a thriller in a future society of uploads.

Most of humanity, the Dispossessed, have returned to savagery, with some communities trying to slowly rebuild civilization after the Separation.

En route to the stars to settle a new planet, the spaceship Shi Shen is populated by a few thousands of people, the Departed, mostly of Chinese origins. It was launched by the Chinese Economic Entity, one of the world powers before the Separation.

The Separation: after the development of mind uploading technology, most among the rich and powerful have chosen to upload and become the Disembodied, living as pure software in Cworld, a virtual world running on supercomputers on Earth and in space.

“Research into consciousness had lead to a startling, though perhaps obvious, conclusion: consciousness was simply the total sum of the brain’s activity—its memories and processing capability… It was then a small step to envisage the movement of a conscious persona into a bodiless digital network… [T]he complete physical transfer of a persona into a digital store, and the provision of a sufficiently powerful computer system to support an artificial world in which personas could reside. This world was Cworld, and it promised immortality: an existence without physical danger, disease or ageing.”

Rob Walters is an experienced writer, author of many books of varied genres, but this is his first science fiction novel. In the Introduction, he says:

“In my youth, I read science fiction books avidly, sometimes as much as a book a day. My masters were: Asimov, Clarke, Sheckley, Aldiss, Moorcock, and many others… Later, when I started to fancy myself as an author, I began to realise that the sci-fi genre offered a writer the ultimate freedom in creativity. Nevertheless, I did not feel inspired to tackle a genre which, I suspected, was still dominated by the mentors of my youth.”

For a first science fiction novel, this is a great one. I encourage you to buy the book for 0.99 US$ (yes, 0.99 US$) at Smashwords. You will not regret buying the book: perhaps this is not a Hugo or Nebula winner, but it’s solid, well-thought, and entertaining science fiction for many hours of reading pleasure.

There are four interleaved stories. One sketches the history of the world from our days to the World Constitution, the launch of the spaceship Shi Shen, the development of mind uploading technology, the Separation, and the development of the Disembodied society in Cworld. The other three stories are narrated by Remus, the leader of a small band of Dispossessed, Tali, a young Departed on Shi Shen, and Zimbaud, a Disembodied in Cworld.

I found especially interesting Zimbaud’s story in Cworld. In this thriller, Zimbaud and friends must find and defeat the source of a mysterious influence, a software “corruption” that threatens all Disembodied with madness and eventually dispersal, the disintegration of personal software identity. In the story, which strongly reminds me of Greg Egan’s Diaspora, we see many features of Cworld history, technology, and society, shown in-depth and with attention to detail.

Remus’ adventures, a classical post-apocalyptic “science fiction western,” lead his little band to a settlement where people try to rebuild a functional, civilized community. To ensure the security of their new home, Remus’ band will have to fight the savage Morgants, whose apocalyptic “religion” offers hopes to gain immortality in Cworld… as a prize for slaughtering enough people.

Tali’s thread is the coming-of-age story of a young rebel in the small society of the Shi Shen starship. Planned by the Chinese bureaucracy before the Separation, the starship is governed by a militarized crew with strict authoritarian rules under a benevolent cover, ubiquitous surveillance, and mind-wiping (or worse) for the dissenters. The crew seem to have lost control of the starship, which of course is kept secret from the passengers. Tali and a handful of rebels will take back the control of Shi Shen with the help of a “ghost in the machine,” and perhaps they will steer it back to Earth.

The three story threads, initially unrelated, come loosely together at the end. But there are still many questions to answer and much to be seen in Walters’ 3D Futures universe, and I definitely look forward to reading the promised sequels.
Posted by Rob Walters at 17:22